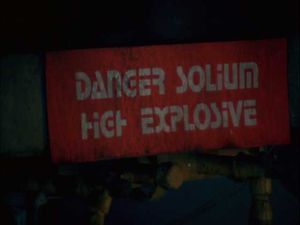 The sign on the outside of the solium tank (TOS: "Fire in Space").

Solium is a liquid fuel used by Colonial spacecraft, and is kept in large supply aboard Colonial battlestars.

Solium is also explosive at high temperatures and any fire near solium tanks could easily destroy any spacecraft (TOS: "Fire in Space"). Several ships in the fleet report solium leaks in the aftermath of the Cylon holocaust.

Apollo and a team from Beta section are sent to the freighter Gemini to detect the harmful leaks (TOS: "Saga of a Star World").