Difference between revisions of "Margaret Edmondson"

Lt. Margaret "Racetrack" Edmonson is a female Raptor ECO aboard battlestar Galactica. She harbors a deep hatred of the Cylons, almost certainly because of the loss of loved ones during the Fall of the Twelve Colonies. In her job she is competent and trusted, although she is willing to put her personal beliefs above duty. Racetrack tends to have a dark, fairly cynical attitude after the Cylon attack.

Racetrack accompanies Sharon "Boomer" Valerii on a mission to destroy a Cylon basestar. She witnesses Boomer's attempted assassination of William Adama in Galactica's CIC (Kobol's Last Gleaming, Part II). Immediately after, she informs the CIC staff that Boomer returned from placing the nuclear warhead inside the basestar orbiting Kobol without her helmet on and that she probably gave away Galactica's position to the Cylons (Scattered).

Racetrack pilots the Raptor carrying Lee Adama's SAR mission to Kobol, encountering fire from Cylon anti-aircraft missiles. Galen Tyrol fells the missiles' DRADIS dish on the surface, and they fail to lock on. Racetrack's Raptor then destroys the Centurians on the ground with a volley of missles, and recovers the trapped Galactica crewmen (Fragged).

Racetrack aids the escape of President Laura Roslin from the brig by falsely claiming that her Raptor was having technical problems, enabling the furloughed Lee Adama to report to the hangar bay instead of the brig per his arrest. She then helps prep the Raptor used as the escape craft for launch, but remains on Galactica (Resistance). On Boomer's death, Edmonson becomes the only person in the Fleet who has seen the inside of a basestar.

Racetrack serves as ECO on Raptor 1, plotting the best point of orbital entry when taking Commander Adama to Kobol to find and meet with President Roslin (Home, Part II). Since then, Margaret flies basic supply runs between Galactica and the fleet. She continues to light candles for fallen comrades in the Cylon attack. She is almost certain she will eventually die on a mission, and is more focused on taking out as many Cylons as she can before that happens (Final Cut).

Racetrack, along with many other pilots, intially snubs Helo upon his return because of his romantic relationship with the Caprica-originated copy of Sharon Valerii. After she insults Kara Thrace over the matter, Starbuck pushes Racetrack face-first into a card table (Flight of the Phoenix). Racetrack later congratulates Helo on his help with the Blackbird, whose DRADIS-absorbing carbon composites Helo suggested, which serves as a quiet apology for her earlier rudeness. 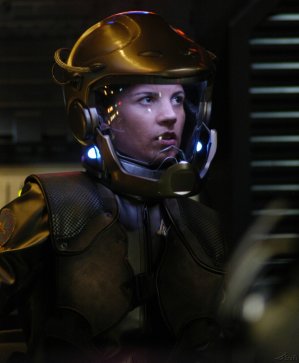 Edmonson aboard a Raptor

Racetrack is particularly overjoyed when Galactica encounters the advanced battlestar Pegasus. While socializing with Pegasus pilots in the hangar bay, she fails to understand Starbuck's contempt for the "scorecards" on which they tally their kills (Pegasus). Racetrack's raptor rescues the unconscious Apollo during the Battle of the Resurrection Ship, and she revives him using defibrilator paddles in her emergency gear (Resurrection Ship, Part II). When Racetrack transports Apollo and a squad of Marines to check the Daru Mozu for signs of sabotage by Cylon sympathizers, her vessel narrowly escapes the ensuing explosion (Epiphanies). Racetrack also later flew a Raptor transporting Apollo back from Cloud 9 after he spent some off duty time there with Shevon (Black Market).

Racetrack is flying a Raptor as part of Starbuck's rescue mission plan to send 20 Raptors back to Caprica to pick up survivors, by making a series of ten FTL Jumps. On the first Jump, Racetrack's Raptor jumps to the wrong coordinates, ending up in a gas cloud. Starbuck and the main group proceed on without her. Preparing to return to Galactica, Racetrack picks up a lot of gravity distortions on her sensors and upon clearing the gas cloud Racetrack discovers an inhabitable planet that the Fleet could colonize (Lay Down Your Burdens, Part I). Though the planet turned out to be marginally habitable at best, it would later be named New Caprica, and most of the human survivors of the fleet would settle down there permanently. (Lay Down Your Burdens, Part II). The discovery of New Caprica by the Cylons approximately a year after settlement will no doubt have some effect upon the permanence of the human settlement there. It is not currently known whether Racetrack herself settled on New Caprica (as many military personnel appear to have done), or whether she remained with the fleet and jumped away when the Cylons arrived. (Lay Down Your Burdens, Part II).